We discovered this unused and overgrown garden, which lines the lower right side of the steep Muswell Hill travelling up to the Broadway. A gateway into the area. We persuaded the authorities to start working on this site on a long-term basis. The work includes coppicing of the area, cutting back the weeds and brambles, re-defining the pathway, turning the soil and clearing the rubbish. This is a long-term project and the work is monitored by our association on a regular basis.

Historical information for Grove Lodge Gardens (as it was named then):

Black and white photo of the park on Muswell Hill, as it was in 1949, is shown below. The park is included in a book Beauty and the Borough by Councillor Frederick Cleary, published in 1949 to display the efforts made by the Hornsey Borough Council to restore public amenities in the borough after the War.

The author and the Town Clerk managed to buy the land for the Council and the second picture shows how they turned it into a little park. The author says “Grove Lodge Gardens, Muswell Hill today. The fence has gone, revealing the full beauty of very fine trees. The opportunities and the natural beauty of the site have been well used by intelligent planning and artistic garden designing.”

The Garden as it looked in 2002. The walls are still there and a faint path can be seen under the leaves. Work started on the pathway in February 2005 with some digging and then path laying. The path begins to re-emerge in March 2005 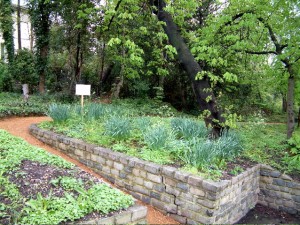